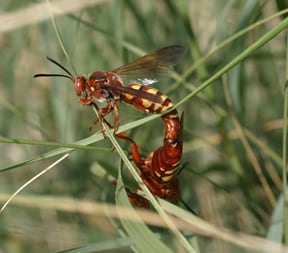 This wasp gets its common name from the fact that it hunts and provisions each of its nest cells with a cicada (Homoptera: Cicadidae) as food for its young. These wasps can become an urban nuisance pest when they select a bare area around a structure as a nesting site. People become alarmed because they look like giant yellowjackets. In the United States they are found east of the Rocky Mountains.

Typically areas of bare ground are used as nesting sites. Many individuals may use the same general area for nesting purposed. While digging their burror the females excavate a sizeable pile of soil which can be disfiguring to a lawn.

Females in general will not sting unless handled or stepped on such as by barefooted children. Males will buzz people but cannot sting.