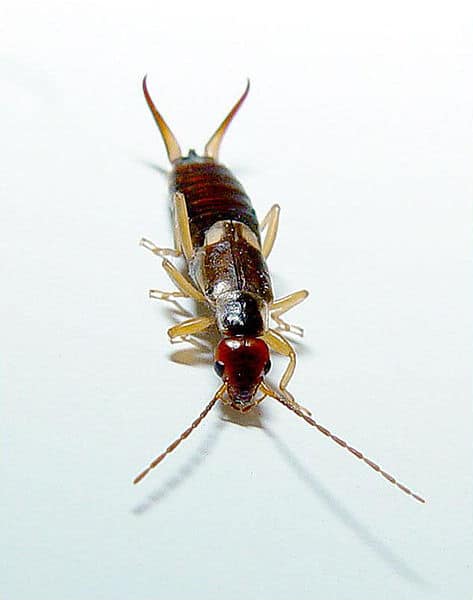 The common name of earwig comes from an old European superstition that these insects enter the ears of sleeping people and bore into the brain. This belief is without foundation. The forcepslike cerci are apparently used as both offensive and defensive weapon and are sometimes used to capture prey. Earwigs are worldwide in distribution with about 22 species occurring in the United States.

Adults about 1/4"-1" (5-25 mm) long with body elongate flattened in form. Color varies from pale brown with dark markings to uniformly reddish brown to black but with paler legs. With 4 wings (rarely wingless) front wings leathery short and meeting in a straight line down the back whereas hind wings membranous fanshaped and folded under front wings.

Earwigs are nocturnal or active at night and hide during the day in moist shady places such as under stones or logs or in mulch. Neither the eggs nor nymphs can withstand long periods or dryness. Earwigs feed on live or dead plants and/or insects. At times they damage cultivated plants.