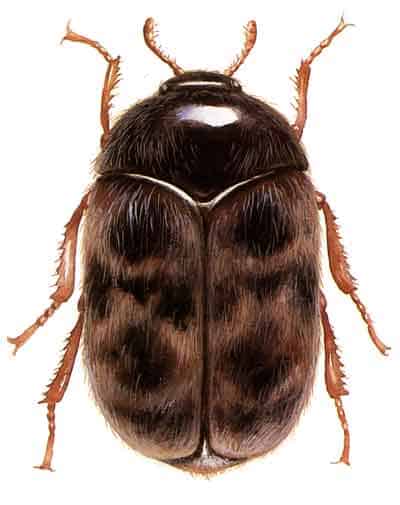 This image or file is a work of a United States Department of Agriculture employee taken or made during the course of an employee's official duties. As a work of the U.S. federal government the image is in the public domain.

This beetles common name comes from its habit of estivating in the pores of bricks used to build storage warehouses in India khapra is the Indian word for brick..

Adults about 1/8" (2-3 mm) long with females larger oblong in shape. Color uniformly dark brown to black or vaguely mottled dark brown with black mixed in without a clearly defined pattern covered with hairs.

The khapra beetle prefers dried vegetable matter to animal matter for food but will attack almost anything of organic origin. Larvae feed on oilseed cereals cocoa wheat barley and rice. They will also feed on dried blood milk and fishmeal as well as pollen and dead insects.