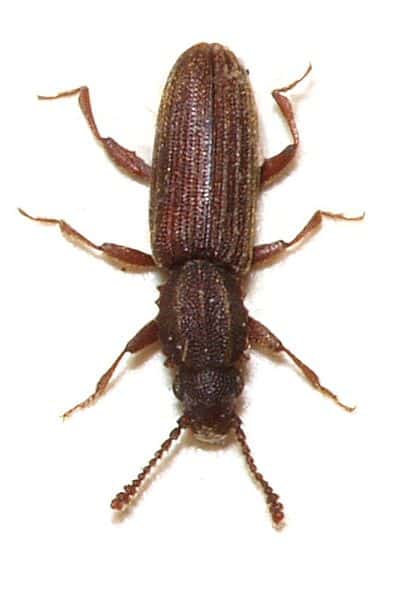 The merchant grain beetle is very similar to the sawtoothed grain beetle in appearance life cycle and habits. For years they were considered 1 species until breeding experiments showed they were 2 different species. This pest is worldwide in distribution and can tolerate the cooler climates.

Adults about 1/8" (3mm) long with flattened body. Color dark brown. With 6 sawlike teeth on each side of prothorax. Length of temple (region directly bhind eyes) less than half the vertical diameter of eye. With well-developed wings and known to fly.

The merchant grain beetle cannot attack sound kernels. Its flat body form permits access through very small cracks and into imperfectly sealed packages. Adults can fly and they are attracted to light.